From ChipWiki
Jump to navigationJump to search 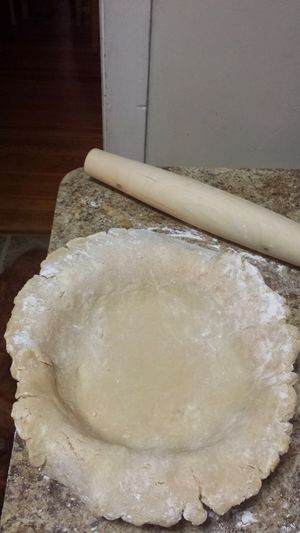 Everyone always talks about a good pie crust... there are a million recipes out there, so here's one more! What makes this one special is that we use some good old fashioned Kentucky Bourbon to make it, because what could be better?

I don't really bake much, so I had to scour the internet like anyone else to find a few good recipes and hints and I put them together. For the most part, though, there were some tips that I've put into this recipe that are, IMHO, the most important:

The first one about using real butter is the most often decried, I'd say -- many people like shortening or lard, they say it makes things flakier, but I find that the amount you squish the butter up and the temperature you use while mixing are more important, and I just never liked the taste of the shortening recipes. Using a liquor seems like a good, albeit more rare, recommendation. Many people like vodka because of the lack of flavor, but I prefer bourbon for precisely the opposite reason.

While I've pulled from a lot of conversations and sites for information, these two articles are the ones I think explain things the best:

They're going to have prettier pictures than I will here, if nothing else, so that's nice.

In any case, here we go... ingredients to make a "full" (top and bottom) 9-inch pie crust:

On butter: Most recipes call for a teaspoon or two of salt and unsalted butter. That's fine... I mistakenly used salted butter once and actually liked the results. The result seemed saltier than if just adding salt separately (although I may have done both), but in the very sweet rhubarb pie I used it in the mixture seemed tastier.

Bourbon should be kept in the freezer prior to using. If the flavor is too powerful, a half-bourbon/half-water mixture is probably OK, but I will call you girlie names.

Taste the bourbon, and if you need to add some water to it and throw it back in the freezer.

Mix the flour, sugar, and (if you used it) salt into a bowl and stuff it in the freezer to keep the bourbon company. I actually use the lining of a crock pot, which holds the cold better and keeps things cold longer so you don't have to keep stuffing the whole concoction back into the freezer while you work. Taste the bourbon to make sure it's getting cold.

Cut the butter up into little cubes. Everyone always says "pea-sized," it seems, but peas are round and it's not worth the effort to shave down the corners. If you're using a normal stick of butter, cutting it in half lengthwise, then half again will give you four long thin strips of butter. These are about the right width, just cut the length down so you have a lot of little cubes and that should be about the right size. Toss these into the freezer for a few minutes too. Have a bourbon while you wait.

Yank everything out. Slowly mix the very solid butter cubes into the flour mixture while mashing at it with a dough blender. A handheld one, of course, I probably should have mentioned that I don't have a KitchenAid or anything so I do this by hand, but it's really not that bad. You want to avoid over blending anyway. Keep this up until the butter starts to melt, just the teensiest little bit, then shove it back in the freezer for about 2 minutes to teach it a lesson.

Have some bourbon, but not the bourbon that's in the freezer for the recipe, we still need that cold.

Yank the mess back out and start kneading it with one hand while slowly pouring the still very cold bourbon in the concoction with the other hand. This should only take a minute or two, and very likely not all of your bourbon... the butter should have already done some work holding the flour together, but it needs help. Moreover, you don't want to squish the butter too small which will happen if you work it too long... there should still be obvious chunks of it in there, well coated in flour. The key, here, is to get the whole mess to stick together when it's rolled out, but not the slightest bit more damp than that. While in the bowl, your hand shouldn't be sticky at all; the moment it is you've gone to far. Still, you don't want things too dry. Mostly this just takes practice. Pictures aren't as helpful as you'd like, plus I don't have any to show you anyway (although there are a lot on the links I pushed out above). Dry and lumpy but holding its shape is the goal.

Split the dough into two pieces, one slightly larger than the other (the bottom of the pie has to ride up the sides of the pan; the top is flatter and smaller). They don't need to be rolled out, just separate and maybe pressed into patties to ensure they're holding up properly. The edges should crack noticeably, but the center should be nice and squishied together.

Throw this in the freezer for a half hour or so... most people recommend longer, but I have no idea why. Drink what's left of the bourbon.

Once you pull it out, all you have to do is roll the dough into the requisite circles. I try to avoid rolling on a floured surface because it seems to mess with the outside texture of the crust. Rolling between two plastic wrap or freezer wrap sheets is a good compromise. Roll the larger portion out until it will fill the pie pan. Feel free to rip off parts from one side and squish them in place on another side if you're lopsided, it will all bake out in the end, just try to keep the thickness consistent.

Stuff with your favorite pie filling (homemade, of course).

Roll the top part out the same way and lay it on top and cut pretty patterns in it if you like.

If you want to do a checkerboard layout, still roll the lump out into a circle, when you cut it into pieces you'll find they fit nicely together. Someone somewhere had a hint about checkerboards but I can't find the link so I'll just explain it: lay down all the vertical strips where you want them (about 1" in width and 1" apart is a good look). If you cut them out of a circle like a good instruction-follower, select one strip for the middle (the longest) and every-other strip towards the smaller ones. Pinch down one end of all the vertical strips. The remaining strips are the horizontals... pull back every-other vertical strip off of the pie (attached only where you pinched) and lay down the smallest horizontal over the remaining vertical strips. Then switch the vertical strips and lay down the next horizontal one, and repeat until everything is down. There should be a youtube video of this somewhere... basically you create the checkerboard weave by alternating which verticals are on top and on bottom and just laying down the horizontal strips.

Cooking times may vary more for the filling than for the crust, but I tend to prefer a short (15 minute) period of 450 degree heat followed by 45 minutes of 350 degrees. Sometimes that works better reversed, actually, but I have no idea why. Some people recommend brushing butter on top of the pie at some point to add to the golden color, but I tend not to bother. If you're watching the pie to see if it's done, the crust should pretty much come out of the oven crispy the way you want it on top. Some touches of darkening are nice, but too many will taste burnt and will get overly crunchy. It's touchy -- make lots of pies to get it right.

Take the pie out, let it cool. Eat, with bourbon.